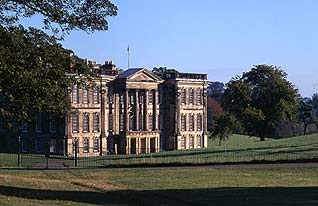 Calke Abbey is the second largest house in Derbyshire, built in 1703 for Sir John Harpur to replace his Swarkestone home. One of the treasures of the Peak, it was acquired in the 1980's by the National Trust and stands in its own large beautiful parklands, over 600 acres, landscaped to reflect the grandeur of the property, with a chapel, a 19th century ice house and stables.

After constructing pairs of 450mm diameter symphonic temporary bypasses between the ponds and using Hazimats to prevent debris and spillages polluting the water, Croft carefully took down the defective existing brickwork and rebuilt the headwall to the Thatch House Pond outfall and part of the headwall to China House Pond, and the side wall to the weir between Thatch House Pond and Mere Pond, including a new foundation. Defective pointing was raked out and re-pointed, brickwork repaired and defective bricks cut out and replaced to walls and in the tunnel.

Sections of the brick tunnels between the ponds had collapsed and remedial works included excavating to expose the collapsed parts, providing formers and rebuilding the tunnels. Remedial works were also carried out to the paving to the tunnels and the beds of the spillways.

Other works included removal of decaying trees to enable perished masonry to be rebuilt, cutting out and replacing defective stones, re-bedding, repairing and repointing and/or replacing stone copings, 2 coat lime render to walls and fixing bird and bat boxes.